No player from England’s third tier has featured for England’s national team since a certain Steve Bull, way back in 1989. And not only did Wolves’ star striker earn his first cap, but he also netted with a clinical finish in England’s 2-0 win over Scotland at Hampden Park.

For Wolves fans, thousands of whom had made the trip up to Glasgow in the hope of seeing Bull in the Three Lions jersey, the finish was no surprise. In that season’s then-named Division Three, he had scored 37 goals in 45 appearances as Wolves won the league, ensuring back-to-back promotions after Wolves topped Division Four in the previous season, with Bull again netting a monstrous 34 goals.

Needless to say, Steve’s rich scoring form for Wolves didn’t stop there. Over 13 seasons at the Molineux, the Staffordshire born striker scored 306 goals in 561 appearances. He remains - high and away - the Wanderers’ most prolific goalscorer ever.

But the good times may well be returning to the Molineux, with Wolves off to a flier in 2017/18, just like they did in 1990. Indeed, as of December 1, Wanderers were strong favourites in the division, with football betting odds of 1/3 with bet365 on Wolves winning the Championship. And, if a Wolves player is to make England’s World Cup squad in the summer – in true Steve Bull style - Conor Coady is a hefty 50/1 shot to make the cut.

The game was actually a traditional end-of-season match against Scotland, for the Rous Cup, after the Home Nations tournament ended in 1984.

Initially, Bull, then 24, was called up to the under-21s squad as an overage player. However, after the senior squad was left a man short following injury, Bobby Robson called him up to the first team squad, joining the likes of Peter Shilton, Terry Butcher, Bryan Robson, and a young Paul Gascoigne.

Bull started the game on the bench. But, he saw action much earlier than anyone – himself included – expected. After picking up an ankle injury, John Fashanu, himself making just his second England appearance, hobbled off on the half-hour mark, meaning Bull was thrust into the action – partnering Tony Cottee in attack with England leading 1-0.

The scoreline stayed the same for a long period, with Bull acquitting himself well. But in the 82nd minute, his big moment arrived.

In true bustling lower-league fashion, a long ball was pumped forward, with Bull challenging Dave McPherson in the air for the ball, which then hit the Wolves striker on the shoulder and landed in his path just inside the area. With all his might, Bull drilled the ball into the bottom corner of the goal.

Without thinking, Bull ran off celebrating towards 68,000 angry Scots, before wisely dropping to his knees and pumping his fists in ecstasy as Gazza joined the celebrations. 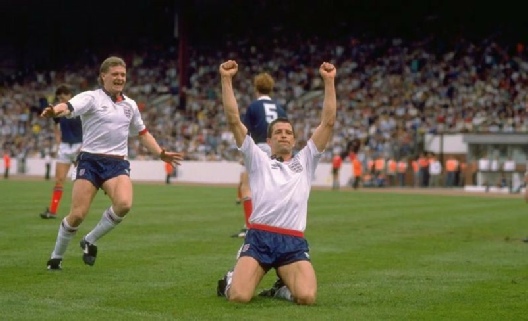 The scoreline remained the same, and Bull was written into English footballing history.

Bull’s England story didn’t end there though. He sufficiently impressed in further appearances for the Three Lions, notching a brace against Czechoslovakia and then strike another against Tunisia,  thus securing his place in England’s squad for Italia 90 – making four appearances in the tournament itself.

His final England appearance came a few months later against Poland, after which he fell out of favour with his future Wanderers’ boss, Graham Taylor.

In total, Bull – all the while a lower league player – made 13 appearances for England, scoring four goals.

In December 2017 Bully celebrated his 30th anniversary for signing for Wolves, and agreed to publish a 2018 calendar. This is available here http://bullybully.net/steve-bull-official-calender-2018-signed/