Pictures from other social events

1.  After checking into our hotel we headed to the first 'real ale' pub of the afternoon - The Bear

2. Reported to be the Oldest Pub in Oxford it dates back to the 13th Century

3. Next stop - The Chequers

4. Refreshing pints in The Chequers courtyard

8. John and Peter had just been trying to work out which way to the ground

32. The War Memorial at St Mary The Virgin Church - and John checks out where the battle was held

39. This was our 2nd pub of the morning - the 1st not worth mentioning

44.  'St Aldates Tavern'. This ended up being our meeting place for other London Wolves supporters

Steve Plant's marvellous fundraising continues, this time in support again of Birmingham Children's Hospital, following the very successful Cure Leukaemia events for Carl Ikeme.  On Friday he organised the Derek Parkin tribute, in recognition of Wolves' record holder.   More pictures, courtesy of Sue Wharton and Steve Carvell, are on Facebook and on the website.  Meanwhile, if you'd like to see Foz and Graham's tribute video together with a contribution from the inimitable Steve Daley go here https://youtu.be/naKPfSwevuc?t=14

As some are staying over in Wolverhampton to celebrate this significant anniversary, Roy is booking tables for dinner at Molineux in Sir Jack's at 7:30pm.  This is a normal dinner menu in SJHs with individual payment at the time.  The Menu is here http://webclient.restaurant-live.co.uk/sirjacks/home  Please let Peter Woodifield know if you wish to come by 15th October or earlier if possible (Roy is away for two weeks on holiday) and also if you need Sunday travel.  We're, of course, hoping also to be joined by local members and, perhaps, a special guest or two!  You could also visit the Wolves Ladies v Sporting Khalsa match at Hednesford on Sunday (2pm ko)

To celebrate our travelling membership, Wolves are inviting WWLSC members for a special lunch in the North Bank (WV1 restaurant) for the Leeds match.   The numbers are restricted to 30 members because of other hospitality commitments so, if you would like to go, please put your name forward to Dave together with £30 each, which will be the cost of the meal to those members, thanks to WWFC's amazing generosity.  Our special thanks to Matt Grayson, Wolves Head of Marketing, who has been strongly supportive of us over the years for arranging this with Roy.  The £30 should be paid on booking immediately to Dave Slape and,  in any case, no later than October 7th.  We hope to be joined by representatives of that winning team from 1966, and look forward to a win against Leeds.

In the tunnel ready for the Half Time present the cheque

Abbswolf and a nutter - Cheer up Roy 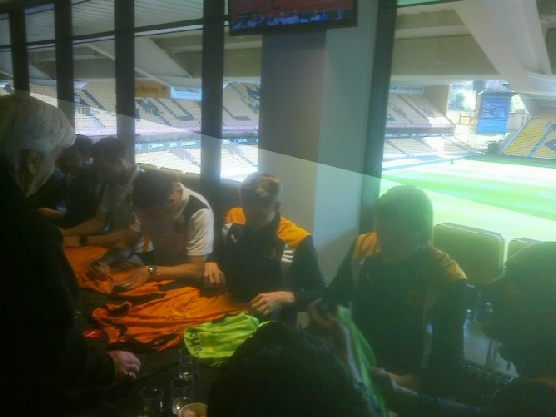 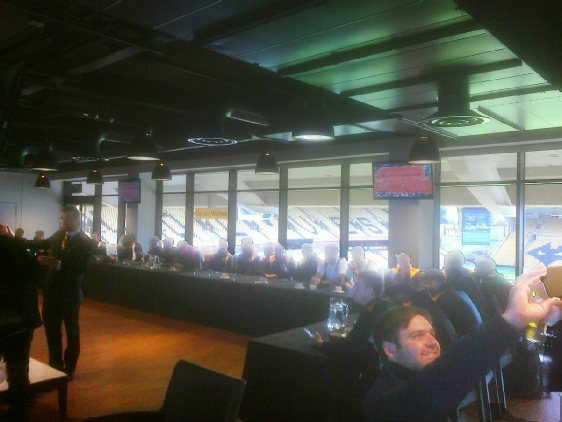 Carol’s and other pictures here

Read more in Tim Spiers’ report of the evening at https://www.expressandstar.com/sport/football/wolverhampton-wanderers-fc/2017/06/29/report-wolves-welcome-new-hall-of-fame-inductees/#Hlb164Jc8eEPDmZh.99

World Wide Wolves - Led by Alan Perrins of Wolves - held a Field of Dreams match in which Alan Herbert represented us playing for WWW UK against the rest of the world winning 4-1 after the Fulham match.

Before that Alan P made awards for contributions to World Wide - the star being Phil Painter, the overseas club Irish Wolves and the UK Club Telford